Of Mist, Ashes, and a Twist of Thorn

The first Stone Breath release was a cassette called Of Mist and Ashes. 1995. It was 11 songs on 1 side of a cassette tape. It was the first and, until 2012, the ONLY Stone Breath cassette release. Most of the songs eventually appeared on the Strange Familiars ep and Songs of Moonlight and Rain, our first full length CD - it was the first ever release on Camera Obscura Records. (some of the unreleased songs from Of Mist and Ashes, as well as all of Strange Familiars and SoMaR all appeared on the Songs of Moonlight and Rain (expanded) CD from Hand/Eye.)

At the time, I don't think I knew exactly why I wanted to make acoustic music. After Cloud and Mourning Cloak, which could be as much electronic experimentation as it was folk, and the Mourning Cloak live shows wherein I was plugging in guitars and twiddling with racks of effects - I knew I wanted to simplify in some sense - but more than that, I just loved the sound of acoustic music. In later years, I would learn this probably has to do with the complexities of the harmonic overtones generated by acoustic instruments, but in 1995 I was a very naive musician. I just knew I wanted to make acoustic music. I came up with a theory, at the time ...and that was: electronic music lends itself to music of the ætheric and astral realms - inner and outer space. Acoustic music tends to be earth music - made from wood and metal, hair, skin, and gut. (In later years, I have come to think of acoustic music as just being more timeless - or more potentially timeless I suppose - in that it is not dependent on electronics outside of the recording studio and performance venues)

I was a VERY naive musician back then. While deeply in love with psychedelic music at the time, I had grown up through my teen years listening to DIY punk/hardcore/underground metal - and I was deeply influenced by DIY/zine culture. While I won't claim there's much from that music in Stone Breath, I did take some of the ethic with me. Why shouldn't I try to make my own acoustic music if that is what I like? Just pick up the instruments and do it. So many people have done this, well before me, that it's not really a revolutionary concept anymore - but I mention it to give due credit to punk rock for my folk band.

I practiced and practiced though - and I hope my improvement in both playing and singing is there to hear from record to record. Having been joined by first Prydwyn, then Sarada, and eventually, Don, Brooke, Carin, Kira and everyone else who has helped with Stone Breath over the years; having played as Tom Rapp's backing band; touring, playing, recording with Stone Breath and every other project I've done since - all of this helped push me and Stone Breath musically.

So, here we are in 2012 and Stone Breath is releasing a cassette on the Brave Mysteries label. I am brought back full circle to 1995. I never minded the format, having run a cassette label for years before I ran a "real" record label - and the cassette is still a widely used audio format in places in the world where people are not yet entirely digitized (amen to those places). Maybe the cassette just becomes a curiosity or a collector's item - but I love the idea of releasing this now - appealing to both my luddite tendencies and that young part of me who bought and traded so much music in that most DIY of formats, the cassette. 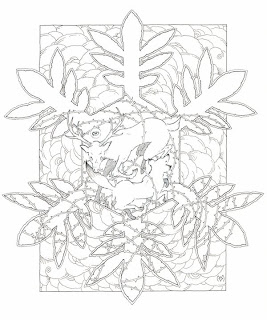 Stone Breath Twist of Thorn cassette, coming April 2012.
Side A:
Where the Crows Go
Hand in Hand*
Johnny has Gone for a Soldier**
In the Garden of Ghostflowers*
No Ends Meet
Silhouette

Side B:
Madstone
How Many Hours 'til the Spider's Work is Done*
Blood Winter