He's got death upon his tongue... 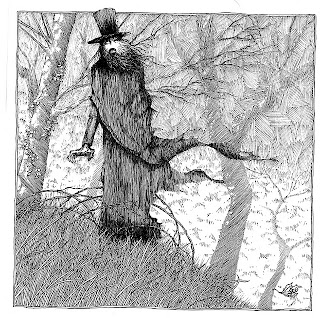 Walking Sam appears on the newest Stone Breath album, The Night Birds Psalm. The song's genesis was in some strange reports about a sinister character I read in 2009. For me, it was the perfect name and theme for a kind of witchy call-and-response blues song. I wrote a part two - of a sort - called Witchwalker, which appears on my upcoming solo album/art book, Undeath (coming in 2012 from Crucial Blast records).

The illustration was done early on during the recording of The Night Birds Psalm - when the original plan was for me to do illustrations and illuminations for every song, as I did for The Silver Skein Unwound and The Shepherdess and the Bone-White Bird before. Unfortunately, Walking Sam was the only drawing I completed in time for the release (in my defense, I did complete an entire series of drawings used for Undeath in that same time).

The original illustration is available to purchase HERE.