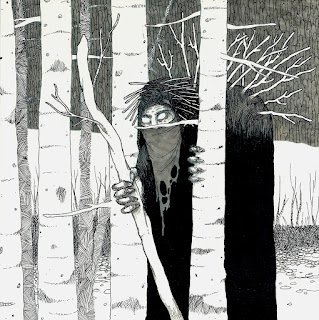 We have been writing and recording our new album, CRYPTIDS for many months. The subject matter covers cryptid creatures of all types - mostly those based in Pennsylvania but some ranging from further abroad - as well as some ghosts for good measure.

The lineup this time was Timothy (me), AE Hoskin - who you may remember from Crow Tongue, and Rod Goelz.

Cryptid creatures have been a lifelong fascination of mine. The sightings of such things seem to weave into folklore - it was natural and easy to write folksongs on this subject and I feel like I've written some of my best songs for this record.

As I've been writing the album, I've also been writing a book which covers some of the same topics - though the book is entirely focussed on South Central Pennsylvania (York, Adams, and Lancaster counties to be exact). The book is titled Beyond the Seventh Gate and it will hopefully be published around the same time CRYPTIDS is released.

For now, we are releasing 2 songs from CRYPTIDS as a digital bandcamp-only single.

We wanted to give away a song and have one song for streaming only, but that option isn't available on bandcamp so we've made the single $1.00 - but one of the songs is name-your-price if you just want the one.

You can name your own price at a higher rate too - every bit helps to get the album into production.

Prydwyn and I are working on yet another Stone Breath album which should be released in 2016 as well. More on that later.